Presently, I am involved in a collaborative, interdisciplinary project to study the glacial history in northwest Greenland from marine and terrestrial archives. The project will provide a detailed land and ocean based reconstruction of the modern and historical processes that control the mass balance of Petermann Glacier, a major outlet glacier in north Greenland that is controlled primarily by ice-ocean interactions. The objective of the project is to further develop our understanding of the processes that exist in the ocean (e.g. temperature, salinity, circulation) that affect the distribution of ice on Greenland. Because Petermann Glacier is an outlet glacier that has its base below sea level, it makes for an excellent test case for predicting the future behavior of other ocean terminating glaciers in the Arctic and Antarctic in the coming century. 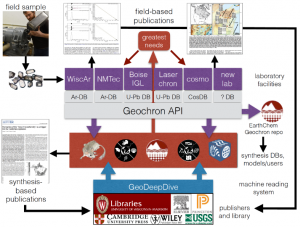 Along with colleagues, we have proposed a partnership between geochronologists who build and run laboratory facilities that are designed to make state-of-the-art age determinations, geoscientists who build synthetic databases that depend critically on geochronological constraints in order to test hypotheses in the Earth and life sciences, and computer scientists and technical academic staff who build end-to-end infrastructure components that are now being used broadly in education and research. The aim of the project is to address a grand challenge that emerged from the EarthCube geochronology end-user workshop: Develop a fully integrated four-dimensional digital Earth, of which geochronology provides the crucial fourth dimension, to fully understand dynamic Earth system evolution. Collaborating institutions include the University of Arizona, Boise State University and New Mexico Institute of Mining and Technology. Within my group, Jeremiah Marsicek (Postdoc) and Shan Ye (PhD student) are playing key roles in cyberinfrastructure development and testing. 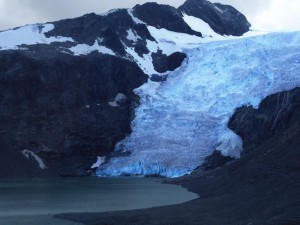 Glaciers are intrinsically linked to climate, and small alpine glaciers are particularly sensitive to climate perturbations and are unique amongst other climate archives because they record high elevation changes typically not widely represented by other climate proxies. In the high alpine regions it is well understood that glaciers were larger in the past few millennia based on exquisitely described and mapped glacial deposits just distal to present ice margins (Davis et al., 2009). These moraines demonstrate climate conditions that were once favorable for expanded ice positions, and are commonly associated with the so-called Little Ice Age (LIA) and/or ‘Neoglaciation’ of the late Holocene (Solomina et al., 2016). However, while the timing of the moraine construction is generally understood to have occurred in the last few millennia, the overall spatial pattern and precise timing of glaciation is still an open scientific question for many high alpine locations. Our group is working to better understand how alpine environments have responded to the last major climate event of the Holocene (i.e. the LIA), which provides a natural test case for understanding the sensitivity of alpine glaciers to past, and potentially, future climate changes.

Permafrost presently covers ~25% of the land surface in the northern hemisphere, and represents a significant sink of terrestrial organic carbon (Schuur et al., 2008). Climate projections into the future indicate a significant increase in global average temperatures that will be amplified at high latitudes (Collins et al., 2013), and could initiate a positive climate feedback through the release of additional carbon during permafrost thaw (Koven et al., 2011). One way to constrain the sensitivity of permafrost to warming atmospheric temperatures is through the geologic record. Most paleo-permafrost reconstructions in North America are derived from geomorphic features (Clayton et al., 2001; Attig, 1989), but these records do not provide continuous records of permafrost and/or climate conditions. Other work in Siberia (Vaks et al., 2013) has successfully reconstructed the chronology of local paleo-permafrost based on the timing of cave carbonate growth going back half a million years. We are currently reconstructing the chronology of paleo-permafrost conditions at Cave of the Mounds in southern Wisconsin and developing a hydroclimate reconstruction over the past 250,000 years near the terminal margin of the Laurentide Ice Sheet.  This work is in collaboration with Ian Orland who is a research scientist at the University of Wisconsin-Madison and Cameron Batchelor (PhD student). 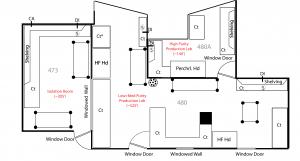